Becoming Elders in Our Evolving World 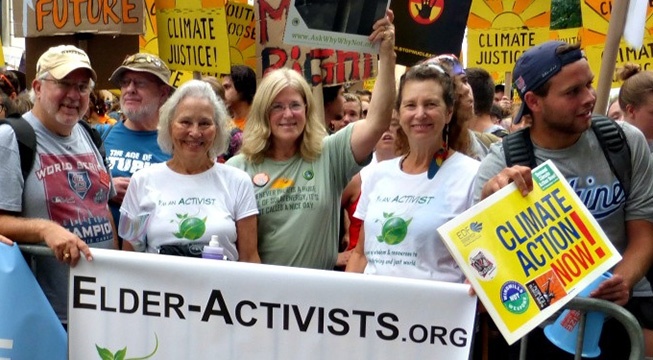 The following is a guest post by Lynne Iser. She is the founder of Elder-Activists.org, whose mission is to inspire, educate and support individuals to become activists—transmitting their wisdom and legacy to future generations. Lynne also is a long time Awakening the Dreamer Symposium facilitator and plays a crucial role in the Philadelphia Pachamama community which is now called the Delaware River Valley Community.

About a year ago, I began the website, Elder-Activists.org, because of the enormous environmental and social issues that we face; and, because I believe that our generation—those of us who have many years of life experience—can be a key force in creating a more just and thriving world for future generations.

There are real opportunities to repair our world. What it takes is an enormous effort, the work of all people—especially us the elders. As elders we have the common sense, wisdom, resources (networks, skills, passion?) and the inner urge to leave a legacy that we can be proud of.

I began this website out of my own late-life experience of becoming an activist. In my late fifties I struggled to make sense of our world. Every direction that I turned—politics, schools, international affairs, health care—was a mess. My children were worried. I felt terrible. What kind of a world was I living in?

I heard the term “on our watch.” There was a growing realization that I could not continue to do nothing. But, I felt very overwhelmed. It was difficult to choose where to put my attention and energy. What good could I do? Could the world really “be saved?”

Working Together as a Community

I was introduced to the Pachamama Alliance and discovered the interrelationship between social justice, environmental sustainability, and a sense of fulfillment. I learned that there was many, many people and organizations that were working for a sustainable future. With great energy I organized and facilitated several symposiums in my region, and then began a “Be The Change Study/Action” so that I had an intimate group to continue learning and to support my activism.

I studied “The Work that Reconnects” with Joanna Macy. It made sense to me that our deepest activism comes from what we love most and where we feel the greatest pain. I experienced hope as I learned about The Great Turning, from an industrial growth centered society to a life sustaining civilization and, I recognized the links to our Pachamama Alliance work—to bring forth a sustainable, just and fulfilling human presence on our Mother Earth. I organized groups, facilitated symposiums, went to demonstrations, and worked against fracking in my state.

At demonstrations I looked around and discovered that I was surrounded by my peers! Others who were also in their fifties, sixties, seventies and more. We were making our voices heard, arising out of concern for our children; and, surrounded by young adults in their twenties.

Aha! The coming age-wave is not something to be feared but was an opportunity! The age-wave refers to the rapid growth of the “elder” population—those who are sixty-five plus years of age. Between 2011 and 2030 elders will expand from 13% of our population to 22%.

This age-wave can be an amazing force for creating a thriving and just world. Older folks have many resources—skills, experience, wisdom, networks, and an inner urging to leave a legacy that they can be proud of. Elders are a gold mine of opportunity for activism!

My fear and despair about the state of the world changed. My anger at our leaders—who seem to be so very shortsighted—became a strong motivating force to work for what I knew what important. Now I also felt the support of a growing community of activists working in so many different endeavors.

This month I turn 65. My children are mostly out of the house. I feel my strength, my convictions and my wisdom—for which I am so grateful. I know that by working together we can make a difference and bring forth a thriving and just world. As Joanna Macy says, “We are so lucky to be alive at such a pivotal time in the evolution of the world.”

I am seeking a new direction for Elder-Acitvists.org. I want to share the “good news,” the successes, the positive endeavors that are bringing forth the Great Turning; rather than what makes us angry and frequently brings on despair. I believe that we have turned the tide, and there are now more people than ever working for a healthy future for all life. I am coming to recognize the truth in my mother’s wisdom—“you attract more flies with honey than with vinegar;” and, more activists with good news than with continued despair.

What We Have Accomplished

Since Elder-Activists.org was launched it has reached hundreds, perhaps thousands, of people through both my personal contacts and via social media.  We've been a presence at demonstrations and actions, on the radio and in the newspaper, marched in the People's Climate March along with a growing coalition of Elders for Future Generations, and was an honored presenter at the Sage-ing International Conference.

I welcome others to join me in this work, expanding the reach and the scope of Elder-Activists.org.

My vision is that our generation will stand as wise elders—leading with our hearts, inspiring with our words, and using our resources—to create a thriving future for all life.

Attend a Symposium Hosted by Lynne Iser in April