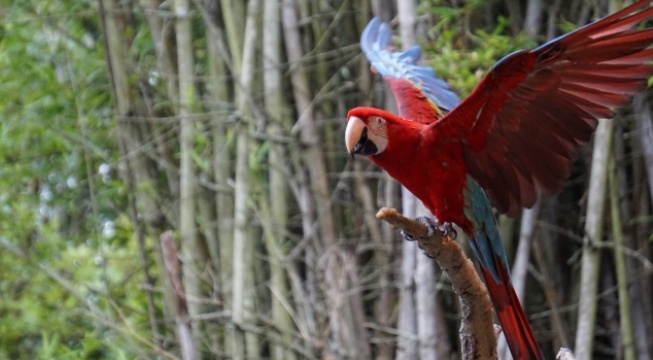 “You never change things by fighting the existing reality. To change something, build a new model that makes the existing model obsolete.”

Our current Western worldview is based on never-ending development, an emphasis on the rights of the individual, and capitalism. We are taught from an early age that materialism and consumption are necessary aspects of life. There is an ever-present dualism which separates society from Nature.

The idea of Buen Vivir is an alternative to this development-centered approach. Buen Vivir is based on the belief that true well-being (“the good life”) is only possible as part of a community. The good of the community is placed above that of the individual. Furthermore, this is community in an expanded sense; it includes Nature, plants, animals, and the Earth. Nature itself must be cared for and respected as a valuable part of the community. The land cannot be owned; it should be honored and protected.

Buen Vivir began to develop in the 2000’s in Latin America for a few specific reasons:

It became obvious that the indigenous people who had been living for centuries in a peaceful and sustainable manner, did not require the development that was deemed so essential by Western philosophies. There must be alternative ways of living, it was reasoned, which did not include modern development and capitalism, and which could be adopted by greater numbers of people.

In the face of climate change and the rapid destruction of the environment, particularly in the Amazon region, there is wisdom to be found in Buen Vivir which rejects the anthropocentric perspective of our modern culture, and places a high value on the importance of preserving, protecting, and respecting Nature. Human beings are no longer the only ones who have values and rights.

These indigenous traditions have existed for centuries, allowing these cultures to live sustainably and in many cases without a need for money or traditional jobs. Work is shared; food is distributed to those who need it most; the only resources taken from the environment are those which are needed for survival. Nature is not harmed and is allowed to regenerate in order to enhance the lives of future generations. The non-human life forms (animals, plants, the Earth, spirits of the ancestors) have their own free will and feelings, and should be respected as such.

Buen Vivir is a radical departure from the current predominant worldview. It can be interpreted differently based on the separate needs of each community. At its core, it allows us to see the world through entirely new eyes. The classic problems from which there appears to be no escape—the need for more control over our lives, the separation of ourselves from Nature, the urge to buy more and own more, the desire to move forward in our technology and our society’s development—fall to the side as we embrace the simple yet groundbreaking concepts that make up Buen Vivir.

How We Can Shift Toward Buen Vivir

Interestingly, some of the paths to Buen Vivir are already becoming trends in our Westernized culture:

A Struggle to Incorporate Into Modern Politics and Economics

Not surprisingly, the principles of Buen Vivir are difficult to carry out in today’s economic and political environment. The governments of Ecuador and Bolivia are struggling to reconcile their goals to lead social change with the day-to-day financial needs of the country and the demands for development from large corporations.

The extraction of natural resources, such as lithium in Bolivia and oil in Ecuador, are at the forefront of the Buen Vivir debate. The Yasuni ITT Initiative in Ecuador is a case in point. The ITT area in Yasuni National Park is a highly biodiverse region of the Amazon rainforest and home to indigenous peoples as well as huge numbers of plant and animal species found nowhere else on the planet. Ecuador developed a plan in 2007 to keep the oil under Yasuni in the ground if sufficient funds were raised internationally. When the funds they hoped for did not come in, Ecuadorean President Rafael Correa canceled the ITT Initiative in 2013.

A Glimpse of What Could Be Possible

But despite these difficulties, Buen Vivir is a visionary concept, a portal into the next era of great social change. It opens our eyes to what could be possible, and positions us to reach a greater understanding of our own human potential.

Eduardo Gudynas, an expert on the study of Buen Vivir, states:

“When Buen Vivir criticizes development, it also questions the very foundations of modernity … It helps us see the limits of current development models and it allows us to dream of alternatives that until now have been difficult to fulfill.”