Healing Sounds of the Universe Myths of ancient indigenous cultures claim that the universe began with one root sound which permeates the entire universe. According to ancient Vedic (Hindu) philosophy, the Sanskrit word, Om, is the primordial sound from which the whole universe emanated. Om represents the Divine and the Absolute.

An article by Hindu religious teacher Swami Niranjanananda Saraswati cites research that measured the brain wave frequency of a yogi while he was chanting Om for ten minutes. As the swami chanted the mantra, Om, the frequency of his brain waves gradually shifted to alpha waves. Alpha brain waves indicate a state of physiological and psychological relaxation.

Swami Saraswati explains further that if a person continues to chant Om until a state of mental concentration is reached, the alpha brain waves may evolve into delta waves which represent the mental state of one-pointedness, and clarity of mind. Delta brain waves are generated in deepest meditation and dreamless sleep. Since healing and regeneration are stimulated in the delta brain wave state—which is why deep, restorative sleep is so essential to health and well-being—chanting Om for an extended period of time may also stimulate the healing process.

Sound has certainly been a sacred form of healing in indigenous cultures around the world since the beginning of time. When sound, a form of energy caused by vibration, is combined with rhythm, the result is music. Randall McClellan in his book, The Healing Forces of Music, explains that the earliest form of music healing was probably a wordless and wailing, vocal chant that was monotonal and rhythmic. Eventually, gourd rattles and drums were added to the chanting and tribal rituals for the spiritual powers associated with them.

Healing specialists emerged from these rituals that were highly respected for their knowledge and skill. With this rise, the long tradition of shamanism came into existence. Shamans cured disease and mental anguish by coaxing the evil spirits into leaving their sufferer through the power of chanting.

According to Jonathan Goldman in Healing Sounds, shamans may have possessed extraordinary knowledge about harmonics as a key for transformation. Harmonics are overtones (pure tone frequencies higher than the lowest tone frequency known as fundamental tones). Each vowel and its related harmonics have particular attributes and energy forms through which the shaman may focus their intention. As Jonathan Goldman explains, vocal harmonics create changes in the heartbeat, respiration and brainwaves of the reciter, altering consciousness and allowing the shaman to enter a state where they are receptive to spirit journeys.

Aborigines Create Harmonics with the Didjeridu – A Gift from the Wandjina

Aborigines create harmonics from an instrument called the didjeridu which is a hollowed-out tree limb they blow into to produce a very low fundamental tone as well as very distinct overtones. The sound produced is very similar to the "One Voice Chord" of the Tibetan monks. The Aborigines believe that before the first Aborigines came to this planet, there was a race of supernatural beings called the Wandjina. They were a "Dreamtime" race and responsible for the creation of the various beings and forms on the Earth. When the Aboriginal people were created it was time for the Wandjina to depart. They left them the didjeridu as a gift.

When the didjeridu sounded, it created a sonic field, a kind of interdimensional window, through which the Wandjina could travel to the Aborigines and vice-versa. Besides being used for ceremonial work, the didjeridu was used for healing. A person with an illness would lie on the ground and the shaman would blow the didjeridu over the afflicted part of the person to facilitate healing.

Sound Healing: The Medicine of the Future

Cymatics, the study of wave phenomena, is a science pioneered by Swiss medical doctor and natural scientist, Hans Jenny (1904-1972). An English osteopath, Dr. Peter Guy Manners invented the Cymatic Instrument based on the principles of Cymatics and the premise that disease is an “out-of-tuneness” of some part of the body. In the Cymatic Instrument are calculated thousands of different harmonics designed to place the body into health and alignment. There are frequencies for every organ of the body and for specific diseases. There are also frequencies for emotional and mental problems. Some imbalances the Cymatic Instrument is being used to treat are asthma, colitis, diabetes, and eczema,

Another scientific method known as Tomatis’ Electronic Ear, was developed in the 1950s by French ear, nose, and throat specialist, Dr. Alfred A. Tomatis. Dr. Tomatis discovered that sounds which contain high frequency vibrations, such as those found in Gregorian chants, are extremely beneficial. It is these high frequencies (around 8,000 hertz) which are capable of charging the central nervous system and the cortex of the brain.

Based on these findings, Dr. Tomatis designed the Electronic Ear, a machine that stimulates the stages of listening development and exercises the muscles of the middle ear to improve the ear’s response to all frequency ranges. Using the Electronic Ear, sound therapists have been able to teach people with disabilities such as dyslexia, autism, learning dysfunction, and attention deficit disorder how to focus and listen more effectively. The Electronic Ear also achieves excellent results with emotional issues such as depression, anxiety and post-traumatic stress disorder.

Currently, sound healing has been incorporated into many types of therapeutic settings including hospital surgery, recovery, birthing wards, as well as for a variety of physical and psychological conditions. Larry Trivieri and John W. Anderson in their book, Alternative Medicine: The Definitive Guide, provide additional clinical applications for sound therapy that include: reducing nausea caused by chemotherapy for cancer; treating headaches and migraines; lowering blood pressure; alleviating pain in dental and oral surgery, discontinuing medication for insomnia; orienting patients suffering from Alzheimer's; and comforting the dying.

Clearly, sound and music can have a very powerful effect on one’s health. But, they can also facilitate a sacred and harmonious connection with the universe.

We invite you to follow in the footsteps of our ancestors and live in deep connection, harmony, and resonance with the sacred origin of the universe by chanting the Om mantra while contemplating its meaning. The Yoga Sutras of Patanjali instruct the seeker to deeply contemplate Om while focusing on the Third Eye energy center as a direct path to enlightenment.

The three letters A, U and M make the word AUM (Om). It is very important when repeating Om to pronounce the ‘O’ sound correctly. The ‘O’ sound begins with an ‘A’ sound as in ‘law’ and ends with a ‘U’ sound as in ‘put.’ That is why it is often written as AUM. When these two vowel sounds are combined in this diphthong, it produces a single, pure vowel sound. When we sound Om it should sound like the word ‘home’ without the beginning ‘h’ sound.

The sound A arises at the throat in a low tone, and gradually rises into a crescendo in the course of the U sound which arises from the tongue, and then slowly softens when uttering the M sound which arises from the lips. When they join together, they become one sound that arises from the navel. The navel is compared to the lotus and it is the place where Brahma, the Hindu God of Creation, resides. The course is like a triangle starting at the base, rising to a peak, and descending again to the base, claims Simon Heather, an internationally known teacher in the field of sound healing.

Living in deep connection and resonance with the sacred sound of the universe can invoke peace for mind, body and soul and allow us to maintain our highest and most sacred nature in harmony with the spirit of the universe.

Sacred Plants—A Gift from the Gods

In this e-guide, John Perkins, best-selling author and co-founder of Pachamama Alliance, discusses how plants can be vehicles of change—helping us to put aside assumptions so that we can be free to live more fulfilling lives. 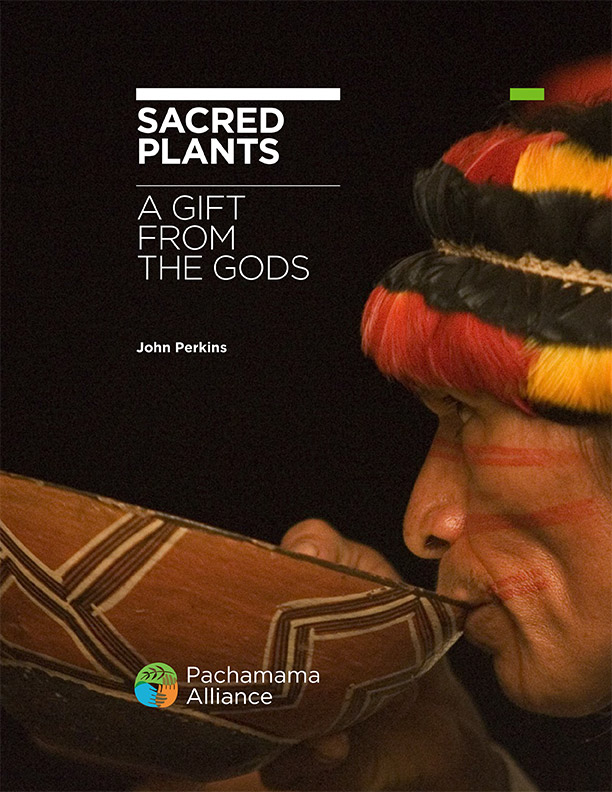