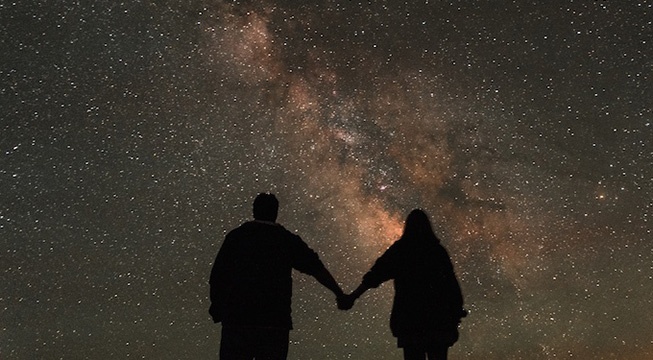 In many time-honored cultures, the New Moon symbolizes potential and embodies a portal for a new vision. The moon’s 28-day cycle from New Moon to Full Moon mirrors the powerful feminine energy, epitomizing the process of creation to manifestation. Working in concert with these cycles is a powerful way to realize our dreams. From this space, on a monthly basis, Pachamama Alliance offers practices and actions to realign with our values for a thriving, just, and sustainable world for all.

This month's New Moon coincides with the Eta Aquarids meteor shower. In the early hours of the morning on May 6, look to the sky devoid of moonlight to catch a glimpse of some remnants of the famous Halley's Comet.

Halley's Comet won't be back until 2062, after having last swung by Earth in 1986. Until then, we can watch icy remnant particles the size of sand grains burn up in collision with the atmosphere when we pass through the comet's trail twice a year. Sister shower to the Orionids that light the skies of October, the Eta Aquarids come once a year.

If you were to trace the paths of the Eta Aquarid meteors backward, you could see that they radiate from a point at the front of the constellation Aquarius, the waterbearer. This radiant point aligns closely with the faint star Eta Aquarii, consequential shower namesake. About one in three Eta Aquarid meteors will leave a lasting trail of luminosity, known as a train. These are at least one second in length, plenty long enough for an "ooh" or "ahh."

Wake up to your true potential as a human being.

Gather your loved ones, grab some blankets and head outside in the hours before dawn. Best viewing will be as far away from light pollution as possible. If you live in a city, consider this as a reason to break out of your routine and head for the park or far-off hilltop you might have been meaning to visit for a while now. If you're not looking to make a trip out of it, a rooftop, backyard, fire escape, or hatchback anywhere will do just fine.

Gather binoculars, your favorite snacks, and download a May sky map to spot new constellations in between meteor streaks. Throwing a stargazing party can serve as a special time to reconnect to each other and our place in the stars. Break out the twinkle lights and put on this Star Party Soundtrack from the BBC to set the mood.

Explore the possibility of a new revolution of consciousness.

The perfect coincidence of the New Moon with the shower's peak provides the darkness necessary to let the Eta Aquarids shine. The New Moon signifies the end of the waning period and the start of lunar waxing, an energetically powerful time for creation. In Taurus, New Moon is a good time to create personal goals in the rooted strength of the Bull. With the timely significance of Aquarius, consider that there is dynamic strength in flexibility.

There is another coincidence at play here with Mercury in retrograde, through which flexibility is key. As we pass Mercury in orbit around the sun, as we are now between April 28 and May 22, astrologers believe this has a great deal of influence over our lives on Earth. Said to govern travel, learning, and communication, Mercury gets blamed for a slew of problems that arise during this period that rolls around three or four times a year. Astrologers often advise against taking major action during this time, but Mercury retrograde isn't all bad.

Rather than a time for new, big decisions, now is a time for reflection, reorganizing, and serious reanalysis. Personal revelation can come from returning to take a look at what’s past. Disruptions in communication with others can have the upside of creating the space necessary to ground us in communication with ourselves. A review of past work can foster a fresh take on what lays ahead.

Reconnecting with our deepest selves is a timely opportunity for recreation.

All of this timed around the arrival of the Eta Aquarids makes now the perfect time to let go of hyper-connectivity and big decisions to surrender together, in celebration, to the joy of the five senses. Wake up to your true potential as a human being and realign with our place in the stars.

Wake Up to Your True Potential