Pope Francis: Changing the Catholic Church, and the World 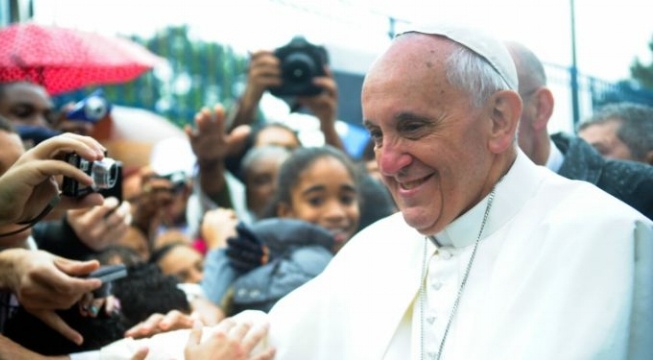 Pope Francis, by all accounts, seems determined to take the world by storm.

Francis, the 266th Pope of the Catholic Church, was born on December 17, 1936 in Flores, a barrio of Buenos Aires. His birth name is Jorge Mario Bengolio.

He is the first pope who has been named Francis. He chose his Papal name in honor of Saint Francis of Assisi. He has said of Saint Francis, “He brought to Christianity an idea of poverty against the luxury, pride, vanity of the civil and ecclesiastical powers of the time. He changed history." The selection of the name Francis is also meaningful because Saint Francis of Assisi especially loved animals and nature, and is said to have been the first environmentalist.

In a striking departure from the generally conservative nature of the Catholic Church, Pope Francis does not hesitate to criticize global leaders and policy-makers. Going against thousands of years of Catholic doctrine, he has opened the doors of the Catholic Church to people who have historically been excluded from the church, including people who are divorced, unmarried couples and their children, and gay people.

He has made huge waves by championing environmental reform in his most recent Encyclical, the Laudato Si'. He links climate change with poverty and indigenous rights, transforming the environmental crisis into a global social justice issue.

During a recent visit to South America, Pope Francis appealed to the world, linking climate change to greed and financial interests:

Ways That Pope Francis Is Changing the Game

He is committed to a respectful interfaith dialogue.

He seeks to unify all religions, even including nonbelievers, on important global topics. For example, in November 2012 he brought leaders of the Jewish, Muslim, Evangelical, and Orthodox Christian faiths together to pray for a peaceful solution to the Middle East crisis. He has a positive relationship with the Eastern Orthodox Churches; he has friendly meetings with Evangelical Protestants in Argentina; and he has long been recognized as a friend of the Jewish and Islamic communities.

He challenges long-held tenets of the Catholic Church.

Pope Francis stated in September 2013 that the church had grown “obsessed” with abortion, gay marriage, and contraception, and that he chose not to focus on those issues but instead wanted to create an inclusive church, a “home for all.” Pope Francis has made it clear that he welcomes all people, even communities that have previously been harshly excluded from the Catholic Church, such as the LGBT community. In 2013, soon after his election to the Papal office, Francis commented, “If someone is gay and he searches for the Lord and has good will, who am I to judge?” In Paraguay, Pope Francis invited the director of SomosGay, an LGBT activist group, to a group meeting with the Pope.

In October 2013, a group of Roman Catholic bishops, convened by Pope Francis at the Vatican, called for the church to welcome and accept gay people, people who have divorced, and unmarried couples. While not yet changing church doctrine, this creates a shift in the tone of the Catholic Church outlook toward groups of people traditionally considered by the church to be “sinners.”

He rejects the formality and the displays of wealth associated with the Catholic Church and the office of Pope.

Known for having a humble approach to the Papacy, he chooses to reside in a modest apartment, instead of the Apostolic Palace used by his predecessors. He has chosen to wear simpler vestments with little or no ornamentation, and he kept the pectoral cross that he had when he was cardinal. He arrives for important meetings in a fuel-efficient Ford Focus.

He aggressively criticizes profit and greed as drivers of the world’s largest problems.

For Pope Francis, this applies both to the Roman Catholic Church itself, as well as to the world’s financial systems. He is credited with saying,

“If investments in the banks fail, ‘Oh, it’s a tragedy,’ … But if people die of hunger or don’t have food or health, nothing happens. This is our crisis today.”

His recent Encyclical speaks of institutionalized greed and “the world's indifference to the destruction of the planet as they pursue short-term economic gains.” He has called money “The devil’s dung.” He is restructuring the Vatican to break up its entrenched blocs of power; and he appointed a commission to seek out corruption and money laundering within the Vatican Bank.

He says that the current global leaders have been making the wrong decisions.

The Pope criticizes the harmful influence that politics, large corporations, and financial interests have had on the environment and human life. He calls for a “new world political authority” and states,

“the Church does not presume to settle scientific questions or to replace politics. But I am concerned to encourage an honest and open debate so that particular interests or ideologies will not prejudice the common good.”

He shows open respect and admiration for indigenous people.

When he visited Paraguay in July 2015, he delivered the Lord’s Prayer in Guaraní, the language of the country’s indigenous people, spoken by 80% of the population. During a Mass in Ecuador, the Pope included readings in Quichua, the most-spoken native language in Ecuador. He apologized to the indigenous peoples of the Americas for the “many grave sins” committed during colonization. His Encyclical calls for inviting indigenous people to be primary contributors to the dialogue whenever their land is concerned.

Pope Francis has made environmental protection a central facet of his doctrine.

“If we destroy Creation, Creation will destroy us.”

Perhaps his most highly-acclaimed and simultaneously controversial action thus far in his Papacy has been the publishing of the Laudato Si' (Medieval Central Italian for “Praise Be to You”) Encyclical with the subtitle On care for our common home. This document was his second Encyclical and was published on June 18, 2015.

A review of the Encyclical by Yale stated:

"Experts say the document has the potential to transform the global discussion on climate change for Catholics and non-Catholics alike by projecting the planetary crisis into moral and religious terms at a critical moment in global climate negotiations.”

In the Encyclical, Pope Francis calls all people of the world to take "swift and unified global action." He steps outside of the typically conservative role of the Catholic Church and "unambiguously accepts the scientific consensus that changes in the climate are largely man-made" and states that "climate change … represents one of the principal challenges facing humanity in our day."

The Encyclical specifically criticizes consumerism, irresponsible development, institutionalized greed, and fossil fuels. The Pope cites these as the causes of “a relentless exploitation and destruction of the environment” and “unprecedented destruction of ecosystems, with serious consequence for all of us."

The document speaks of how the poorer countries suffer at the hands of the rich, and the actions of the rich advance climate change. “The warming caused by huge consumption on the part of some rich countries has repercussions on the poorest areas of the world … There is also the damage caused by the export of solid waste and toxic liquids to developing countries, and by the pollution caused by companies which operate in less developed countries in ways they … would never do in developed countries or the so-called first world.”

The Pope’s stance on technology is especially interesting. He says that the “dominant technological paradigm” is a key contributor to the environmental crisis and human suffering. The Encyclical states:

“The technological paradigm has become so dominant that it would be difficult to do without its resources. It has become countercultural to choose a lifestyle whose goals are even partly independent of technology.”

In early July 2015, the Pope traveled to Ecuador, Bolivia, and Paraguay, three countries that have been severely impacted by climate change and by the “irresponsible development” that he railed against in his Encyclical.

In Bolivia, he asked for forgiveness from the indigenous people of the Americas: "Many grave sins were committed against the native peoples of America in the name of God." He spoke of both the colonialism of 500 years ago, as well as the “new colonialism” in which corporations and economic interests take lands or rights from people in the name of progress and profit.

In Ecuador, where the Amazon rainforest and its biodiversity is at high risk to development for profit from oil, the Pope stated,

"The tapping of natural resources, which are so abundant in Ecuador, must not be concerned with short-term benefits.”

This statement directly targets Ecuador’s environmental policies, and points out the difference between the Pope’s Encyclical message and Ecuador’s actions regarding oil development in recent years.

A Driver of Transformative Change

Pope Francis’ statements point toward radical change of the very institutions that form the basis of our modern culture. The Pope is asking for economic and financial change; political change; and profound social change.

In a recent Mid Year Update, Bill and Lynne Twist, and John Perkins, co-founders of the Pachamama Alliance, recently agreed that the Pope’s message is uniquely inspiring because it echoes the same call for a revolution that we are hearing at this time from the United Nations, the Dalai Lama, and social justice and activist groups from around the world.

The old status quo, the corporatocracy, the political regimes built upon upholding the privileges of the rich, are scrambling to hold their own. The world is not going to tolerate these extreme injustices anymore, and it is Up to Us, the individual people, civil society, to create a profoundly new way of seeing the world.

The Pope’s call for a revolution is unmistakeable. He says, "Although the post-industrial period may well be remembered as one of the most irresponsible in history, nonetheless there is reason to hope that humanity—at the dawn of the twenty-first century—will be remembered for having generously shouldered its grave responsibilities."

In a comment perhaps profoundly indicative of his plans for the future, Pope Francis appealed to the faithful when he said:

"God is not afraid of new things! That is why he is continually surprising us, opening our hearts, and guiding us in unexpected ways."