The Hummingbird is Absolute Bravery: An Interview on the Teachings of the Medicine Wheel (Part 2) 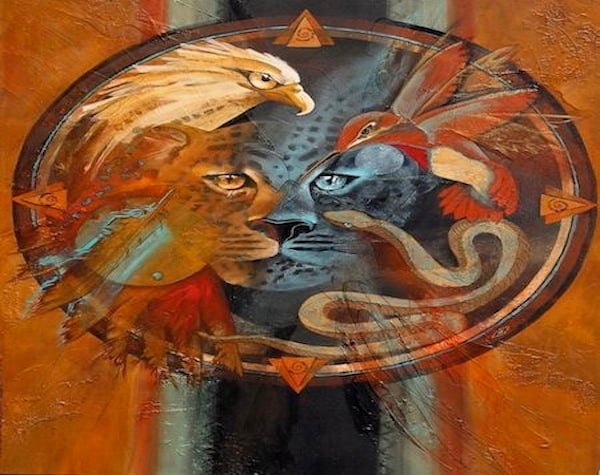 Part 1 of this interview explored how one of our current Development interns ended up taking a year-long experiential course on the Medicine Wheel, and the profound impact these practices have had on her life. After the course, she went on a nine month trip to India and across Asia, calling upon the teachings for strength and guidance.

In a three-day retreat once every three months, she discovered the significance of each of the four cardinal directions within these teachings, the power of the animal spirits, and explored a connection to the sacred lineage of healers who embodied this ancient wisdom.

What follows are her reflections on the teachings of each direction, including her special connection to the bravest, most courageous animal spirit of all.

The Medicine Wheel uses the cardinal directions as representations of different teachings. Could you describe more about that?

We also learn to stop repeating the lessons and start learning the lessons. We learn to transform our deepest wounds into sources of power and compassion, forming non-judgment, non-attachment, non-suffering, and walking in the beauty of truth.

In the West, that is the Jaguar. This is about breaking free from the grip of fear and taking a journey beyond death to bring closure to what has been. It’s about fearlessness, non-doing, non-engagement.

One of the things we’d do when working with a sacred energy spirit, an animal spirit like Jaguar, is play with how it felt to be Jaguar. We would close our eyes and feel what that would feel like to be in a tree, to be at the top of the food chain, to be carefree.

But at the same time you feel what it's like to be so focused on everything that’s going on around you, to be so present. Every little creak of the trees, every little bird, you can hear everything, feel at one with everything, and be free of fear.

What were the teachings of the North?

The North is where we learned to journey outside of time and space, where everything is possible. This is where we learn to drop our limiting roles and beliefs and where we really delve in and see what secrets we keep from even ourselves.

I think that the North direction was very challenging for a lot of people in the group, including myself. These classes took place every three months so in between the first and second, the second and third, the third and fourth, there’s a time in between where you get to see how this energy plays out in your day-to-day life.

With this one, you’re dropping limiting roles and beliefs, you’re basically dealing with Ego. And the North, from what I understand is the Hummingbird, which I really connect with. It is one of my spirit animals.

Every time we open sacred space we do an invocation with our rattles and ask different spirit animals, different guides, different sacred mountains to be there with us at that time. I always call on the Hummingbird because the Hummingbird for me is absolute bravery. To travel so far every year, vast distances on just nectar, in this huge, crazy world, it takes a lot of courage to do that!

And lastly, the East?

In the East direction, the Eagle and Condor, we focused a lot on breath work and on holotropic breathing. We utilized certain types of music and breathing to allow ourselves to work through dense energies at a different level of awareness.

The medicine wheel of the East direction is about releasing your limiting core beliefs and projections, becoming visionary and learning how to work with energy and intention to create your reality and dream your world into being.

So what’s really amazing about that is we had the ability to do this final ritual before the final rites in the direction of the East. We would send a form of energy to our mesa and burn through every unneeded aspect in our lives. It was said at the time that this would cause a huge shift for anyone, and to do this only if you really want a big shift.

And I think I was the only one in the group that wanted to do this big shift. But I knew I was about to graduate and I knew that things were about to change in the next year. Then all the things in India happened later and I’ve been thinking, “Is this what that was about?” Getting rid of all of your attachments—I had two pairs of pants and was living out of a backpack for nine months—it doesn’t get much simpler than that.

I think dreaming your world into being is one of the greatest gifts that the shamans of this tradition and other traditions can give because when we limit our dreams we limit our possibilities. And allowing ourselves to dream in an infinite number of ways is I think the best way to create a more sustainable, whole life for ourselves and for the entire world.