The Tiny House Movement—When Is Bigger No Longer Better? 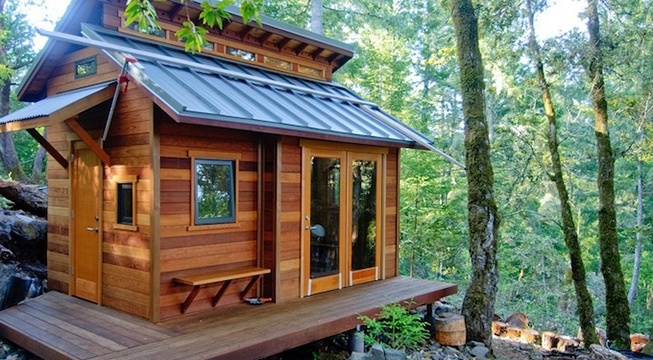 Ranging from cars to hamburgers, “Bigger is better” is a mentality that has been engrained into the hearts and minds of many people living in the United States. Since WWII, the size of American homes has increased substantially. The average square footage—currently 2,300—has more than doubled since the 1950s when it was less than 1,000.

This supersized way of thinking is not nearly as prevalent in other nations, which explains why the big house fad for the most part has only caught on in the U.S. The problem with it is that there is simply not enough space or resources for everyone to have a 2,300 ft2 home, making this mentality unsustainable. As a result, the Tiny House Movement was formed and many people are moving into “tiny houses” that are both more affordable and environmentally conscious.

Why Do Americans Want Bigger Homes?

The U.S. leads the world in average home size and even their European counterparts have much smaller dwellings. For example, France’s average home is 1,216 ft2 and Great Britain’s is a mere 818 ft2—smaller than the United State’s 1950s average.

Home ownership in the U.S. and abroad is generally viewed as a good investment and a sign of stability. Some young people have no interest in taking part in the big house trend but still want a home to call their own so that they can style it themselves and use it as a way to feel like a secure member of society.

Despite the young people who are trying to downsize, most Americans still strive for large houses. Many attribute the growth in average home size in the U.S. to the atomizing of the American family, where every member now requires their own space. In an interview, owners of large homes on Long Island explained a mentality common in the U.S. that they claim rationalizes the big house phenomenon. As part of the American Dream they want to provide their children with a bigger and better dwelling than what they grew up in. They believe that doing this will keep their children happy and safe within the walls of their spacious house, which will keep them from venturing out into the dangerous world to have fun.

As a result, in some places the concept of a neighborhood community has become obsolete because the house itself has turned into a sort of community as its residents stop needing to go out for entertainment.

Additionally, as upper-class families start having bigger homes, the frame of reference shifts, causing members of all socio-economic levels to think that a large house is standard and that they need one too. This creates a cycle of wanting to “keep up with the Joneses” as people begin seeking bigger homes if they perceive their dwelling to be smaller than standard.

The Tiny House Movement exists to provide people with smaller, cheaper, and more ecologically-friendly housing alternatives. Throughout the 20th century, various people have suggested ways to reduce the size of homes but architect and writer, Sarah Susanka, is considered the founder of the modern day tiny house movement. In 1997 she published “The Not So Big House” where she explains the financial and environmental benefits of living in a smaller home.

According to an interview with Susanka there are no strict square footage rules about what constitutes a tiny house, although they generally don’t exceed 500 ft2. A guideline is to build it one-third the size of what a person thinks they need. Even more important, however, is to make the house as small as possible while also accommodating the resident’s needs. This can be done by eliminating all unnecessary possessions and space and finding creative ways to have multiple uses for various parts of the home.

For example, in one tiny house, the shower is the bathroom and in order to keep the entire space from getting wet, there is a glass sliding barrier that the resident can use to cover the shelves and toilet while bathing.

A smaller home will automatically be more ecologically friendly because it requires less power to heat it and fewer resources to build it. Owners of these dwellings, however, will often take further steps to minimize the carbon footprint of their home. The Lilypad, a beautiful tiny house in Portland, features solar panels, a system that collects rainwater from the roof, and a even a self contained composting toilet.

Susanka stresses that for a tiny house to be truly comfortable, it must be aesthetically pleasing and have a style that suites the owner. This explains why people would rather own their tiny home than just rent a small condo. To personalize their tiny house, owners can either build it themselves or work closely with a professional to ensure that they get exactly what they want. DIY style, a tiny house generally costs between $20,000 and $30,000 and the price of one that’s professionally built will vary around $40,000 to $60,000. Not only is that far cheaper than most other housing options, but the inexpensive upkeep will also save the owner money in the long run.

The Tiny House Movement is proof that young people are demonstrating interest in sustainability and are focusing on what brings them happiness. Susank explains that as people downsize their home and reduce their possessions, they will have more freedom to take time to be present in their own lives.

Freddie Ehlers, Ecuador’s minter of Buen Vivir, recently delivered a speech in San Francisco about the importance of living as one with nature. He spoke of the Tiny House Movement and used it to show that young people are finding new priorities.

A group of friends consisting of four couples moved into tiny houses in a rural setting. They bought land outside of Austin, Texas upon which they built five tiny houses—one for each couple as well as a common space with a kitchen—that had various environmentally friendly features to them such as roofs that collect and store rainwater. These friends say that they look forward to growing old together and call their line of houses “bestie row.”

Many people invest in tiny houses with the purpose of living a simpler and more rural lifestyle. One difficulty that some tiny homeowners face is the cost of land. While only a small plot of land is needed for a tiny house, there are sometimes minimum square footage limits on rural dwellings. People often get around this restriction by either seeking out land that has no such law (generally the more rural the land is, the looser the rules will be) or by buying large plots of land and living in the middle of them, making it harder for authorities to spot their illegal dwelling.

Finding a location for a tiny house in a city is even more difficult. As of now, most cities have building codes that don’t allow homes smaller than 1000 ft2. People have tried finding loopholes in the law such as registering their home as a workshop or shed, but this too can lead to problems because it is often illegal to live in such a building. These kinds of restrictions make it difficult for people to downsize while remaining in cities. Urban residents are therefore forced to either live in illegal dwellings with the hopes of not getting caught or relocate their tiny home to a more rural setting.

In order to make tiny houses an option for everyone, cities could change their building codes to allow tiny house neighborhoods, giving more options to people trying to live in an urban tiny house. While this movement is young, it is catching on quickly. With the continued support of activists, it is likely that in the future city planners will make more accommodations for tiny houses.

For more inspiration about living a life that is not focused on material wealth, you can listen to Freddie Ehlers’ speech about an alternative way of living.

Read about and listen to Ehlers’ speech