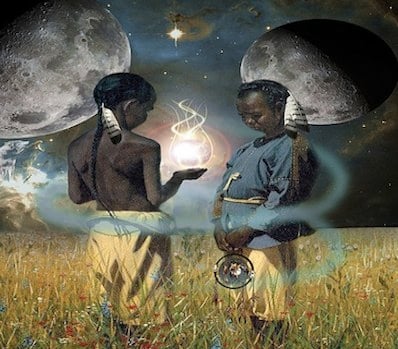 In previous blog posts I presented some specific examples showing how indigenous knowledge can be a valuable resource for modern scientists in improving such things as agricultural techniques and conservation efforts. These types of modern-indigenous partnerships are numerous and continue to grow.

Beyond the development of specific programs, and to the extent indigenous communities are open to embracing partnerships with the modern community, such collaboration also strongly empowers indigenous peoples and helps reawaken the modern world to the profound value of indigenous wisdom.

Too often indigenous communities are unjustly (and illegally) denied a genuine voice in the development of their land by modern business or state interests. Potential economic benefit is often leveraged over the protection of the environment, cultural diversity, and basic human rights.

Such expansion of awareness can help ease the grip of economic incentive which underlies much of the invasive modern policies that threaten indigenous livelihood. In other words, modern-indigenous partnerships help challenge and transform the economic and social values of the modern world.

Speaking the Language of the Modern World

Consider a collaboration where an indigenous community offers its vast ancestral knowledge of a local ecosystem for documentation by conservationists.

While the end result may be a conservation program, the indigenous community now also has their indigenous wisdom translated into a language the modern world can understand: data.

This asset is seen as having legitimacy in modern dialogue. One could say that they have translated some of their cultural and experiential capital into the intellectual capital that is so highly valued by the modern world.

Of course, indigenous peoples do not need such intellectual capital in order to warrant a genuine role in modern dialogue. At least they shouldn’t. Basic human rights demand such inclusion, while an epidemic of human greed prevents it.

Part of what modern-indigenous partnerships do is encourage recognition of basic human rights, Rights of Nature, and alternative solutions to shared concerns. They help dissolve barriers of communication and understanding by clarifying common goals in order to generate mutual benefits.

Furthermore, collaboration between modern entities and indigenous peoples helps to expand the capacity for compassion and inclusion in the former, and reaffirm the voice and independence of the latter.

An environmentally sustainable, socially just, spiritually fulfilling future will ultimately be built by a human community that embraces its indigenous heritage.

Explore Our History of Indigenous Partnership