3 Reasons Community is Critical for Solving the Climate Crisis 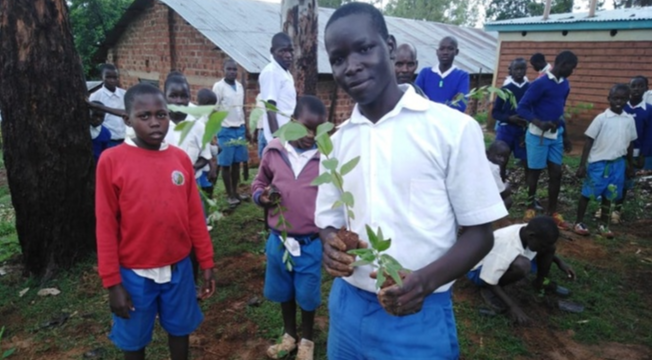 Students in Micah Opondo's community got involved with his tree planting project at their school in Kenya.

Environmental destruction is continuing despite our best personal efforts—such as recycling and using reusable bags. And any national or global effort to take bold climate action seems to move too slowly or maybe not at all. Given the magnitude and scale of the climate crisis, what can we do as committed individuals to have more of an impact?

Will Grant, an environmental educator and mentor to Pachamama Alliance, has identified four levels in which people can take action: the individual level, the level of direct connections (friends and family), the level of community and local institutions, and the fourth level of policy and national institutions. Grant believes we can have the greatest impact by acting at the local community level.

There are several reasons why taking climate action at the community level is the most effective tactic.

1. Pushing the Boundaries of What’s Possible

Acting at the community level expands our sense of possibility. As Grant puts it, involving others in your community to take on local projects gives you the sense that “we can actually do something about this issue.”

When you’re acting alone or attempting to influence national institutions, the issues at hand seem too large. As a result, your sense of possibility is stunted by the enormity of the problem. But, knowing you don’t have to face these challenges alone increases your willingness to take on those issues and adds to your capabilities and resources. No one can do this work alone, and this has always been the case for social and political causes. Environmental issues are no different.

Grant also explains that as you instigate changes to local institutions, others in the community begin to wonder, “why don’t we have that too?” When things have always been a certain way, it can be hard to imagine alternatives. But, by seeing local examples of successful climate action, a broadened sense of possibility can emerge and the capacity for creativity soars.

The citizens of Toledo, Ohio are demonstrating the efficacy of local climate action by challenging what’s possible at the community level. According to Vox, citizens of Toledo, Ohio voted to grant legal rights to Lake Erie. If Toledo citizens find that Lake Erie’s “right to flourish” has been violated, they can sue on its behalf. This is the first attempt to protect an entire U.S. ecosystem.

It all started when a handful of Toledo citizens were discussing the 2014 water crisis in Ohio. Run-off from nearby factory farms was causing toxic algae blooms in Lake Erie, leaving half a million people without safe drinking water. The citizens of Toledo realized that the government would continue to fail to address the root problems causing environmental destruction in their communities. So, they successfully passed a ballot initiative to legally protect Lake Erie.

Even though a judge recently ruled that the local group responsible for the Lake Erie Bill of Rights can not enforce their initiative, people are even more encouraged to keep fighting to protect Lake Erie. They know that what they are attempting to achieve is groundbreaking. The Bill of Rights has the potential to limit corporate agricultural activities because of their toxic impacts on the land and water. As a response, a factory farm has sued Toledo over the initiative with the state’s backing. Supporters of the Bill of Rights feel that the resistance from the state and corporate farms is only proof of the initiative’s efficacy and potential impact.

2. The Potential for Exponential Impact

The second reason why taking climate action at the community level is the most effective is that local grassroots solutions have impacts that reach far beyond the individual. Will Grant explains that when a local institution changes, other local institutions can follow its model for change.

Community initiatives have the potential to affect thousands of people, and that impact grows exponentially as other communities follow. And they all start with just one individual or group starting the conversation in their community.

Lore Rosenthal and Michah Opondo are two individuals who started the conversation in their Communities and are seeing their impact grow. After getting involved with Pachamama Alliance’s Drawdown Initiative, Lore catalyzed the Drawdown activities in her D.C. Metro Pachamama Alliance Community. What started as a single Reversing Global Warming: Introduction to Drawdown workshop has mounted into a community-wide movement. Since then, the Community has reached over 700 people, spreading Drawdown’s message of possibility and practical climate solutions.

Similarly, Micah has galvanized his community in Kenya to take climate action. Last year, Micah and his team of volunteers planted 1,500 trees in five schools, and intend on planting 20,000 trees this year. He has also held multiple community trainings on land management and plans to develop an environmental program for students in his community.

3. Only You and Your Community Know Best

Taking climate action at the local level is also effective because only you and your community know the unique challenges and opportunities it faces. People living and working together in a community are closely connected to its specific needs, the challenges in addressing those needs, and the opportunities available to instigate change.

Because anyone can contribute in a local project, the challenges and opportunities become more accessible by working with others in your community. As a result, the collective wealth of knowledge, experiences, and resources drawn from the community can translate into practical and effective climate action plans.

Without this intimate knowledge and connection to the community, solutions may fail to address the root causes of the environmental crisis at hand. By making collective decisions rooted within your local community, your climate action plan is holistic, comprehensive, and root-striking.

One example of root-striking local climate action is the growing community rights movement in New Hampshire. In March 2019, Exeter, New Hampshire residents voted to adopt a Right to a Healthy Climate Ordinance. According to the Community Environmental Legal Defense Fund, the Ordinance establishes the community’s right to clean water and air as well as local self-governance, banning toxic corporate activity.

One growing threat is a 27-mile long fracked gas pipeline. This project could contaminate the Piscataqua River watershed, on which communities across eight New Hampshire towns depend for clean water and air.

The community members of Exeter assert that because they live there, they know what’s best for the health of their community, and have a fundamental right to make informed decisions about it. Project developers and state agencies are removed from and far less concerned about the direct impacts of extractive corporate activity on local communities. Exeter residents are ensuring that their collective voice is shaping the decisions impacting their home.

It Starts with Us

The Four Levels of Action framework is useful in determining how to take practical and effective climate action. With the help of your community, you can tackle the most pressing environmental issues through collective action. It’s up to each of us to start the conversation and create the space for bold, collaborative solutions to the climate crisis.