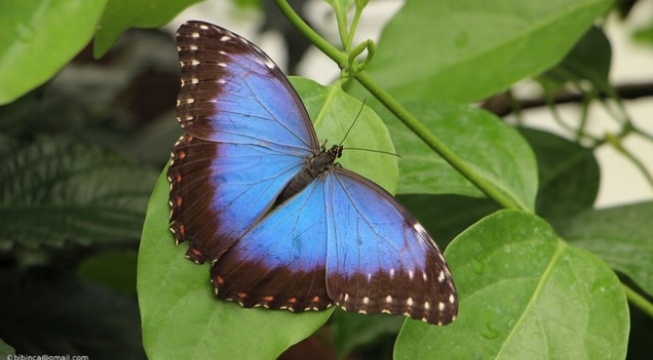 The genus Morpho contains 29 species and 147 subspecies of butterfly that are native primarily to South America. The name Morpho means "changed" or "modified" and also serves as an epithet for Aphrodite, the goddess of love. Morpho butterflies are famous for the breathtaking iridescence in their coloration, which is actually due to microscopic scales on the butterfly.

The dorsal side of the wings of many Morpho butterflies is breathtakingly beautiful. The tops of the wings appear to be shimmering, metallic shades of blue, green and purple. These colors are not a result of pigmentation, but rather are an example of iridescence through structural coloration.

The Morpho gets its famous iridescent look because there are actually microscopic scales laying in a diamond-like pattern that cover the Morpho's wings. The scales reflect up to 70% incident light falling on them (including UV) repeatedly at successive layers, causing the colors of the butterfly's wings to vary with viewing angle.

In most species of Morpho, only the males are colorful. Biologists believe this is because coloration is used for intrasexual communication between males. It's thought that the eyes of Morphos are highly sensitive to UV light, enabling the males to see each other from great distances.

The iridescent lamellae are only present on the dorsal side of their wings, though, leaving the ventral side brown. The undersides of all Morpho's wings are decorated with ocelli, or eyespots.

The eyespots on the undersides of the wings of both males and females may be a form of automimicry. The ocelli can deceive potential predators of the Morpho, either by drawing attention away from the most vulnerable parts of the butterfly's body, or to appear as another inedible or even threatening animal.

The lamellate structure on the tops of the Morpho's wing has been studied as a model during the development of dye-free paints and anti-counterfeit technology used in currency.

Morphos typically live solitarily, except during the mating season. After mating, green dewdrop-like eggs are deposited by the female butterfly onto or nearby the intended caterpillar food.

Some time later, the larvae hatch from the eggs and grow into caterpillars, which have reddish-brown bodies with bright lime-green or yellow patches on their backs. When disturbed, a caterpillar secretes a fluid that smells like rancid dairy, which helps to protect it from predators.

The caterpillar will molt five times before entering the pupal stage, which lasts for 20-30 days.

During this stage, the caterpillar is transformed into a butterfly. Pupa are attached to leaves or twigs of the food plant, but are hanging free. The bulbous chrysalis is jade-green and emits a disturbing, ultrasonic sound when touched. Inside the pupa, the caterpillar's tissues are broken down and the adult Morpho's body is formed.

Once hatched, an adult Morpho lives for about two to three weeks. The entire life cycle of the Morpho butterfly (from egg to death) is about 115 days.

Morphos are diurnal, meaning they are most active during the day. Males are territorial, spending their mornings patrolling the banks of rainforest streams and rivers for potential invaders or for food.

Morphos taste with sensors on their legs and with their antennae, they taste-smell the air. Morphos feed on the fluids of fermenting fruit, decomposing animals, tree sap, fungi and nutrient rich mud.

Although the Morpho butterflies are not currently threatened, the habitat in which they thrive in is.

Oil exploration and drilling in the Amazon rainforest is causing the forest to become deforested, contaminated by oil leaks and spills, fragmented and populated by people. These factors combined make these parts of the rainforest that were previously lush and pristine essentially non-livable for indigenous people and creatures alike.