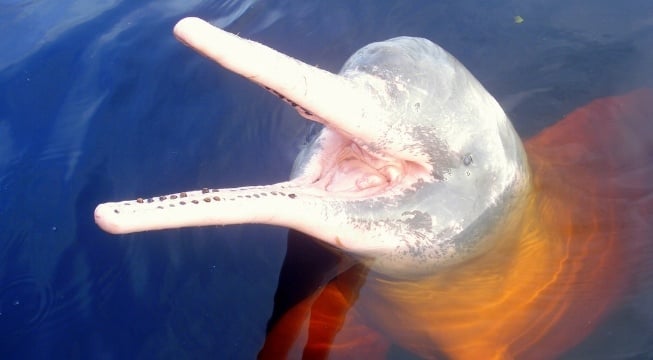 The Amazon River dolphin is the largest of the freshwater dolphins and is endemic to the Amazon and Orinoco river systems in South America. Also known as boto, these playful pink dolphins can be found in the river basins of Ecuador, Brazil, Peru, Colombia and Bolivia.

The distribution of Amazon River dolphin covers approximately 7 million square kilometers across the Amazon and Orinoco river basins and their main tributaries.

Where these beautiful pink dolphins can be found throughout the year is dependent upon the seasonal water level cycle. During the wet season, botos can easily navigate smaller tributaries, and individuals even venture into river floodplains and flooded forests.

The botos most amazing characteristic is its color, which ranges - depending on its age - from grey to a solid or blotched pink. Mature Amazon River dolphins grow to a length of 2 to 3m, making them the largest of the freshwater dolphins.

Amazon River dolphins have several adaptations that make them unique:

Like other dolphins, the boto relies on an internal sonar system to navigate its habitat to find food. Although they typically exist solitarily, botos have been found to make 10 distinct communicative calls in captivity.

In the wild, botos are quite playful and curious. It's not unusual for them to rub against canoes and grasp canoe paddles of fishermen in the rivers. They have even been observed throwing sticks and playing with logs and smaller animals such as turtles and fish.

Like its relatives elsewhere, the boto's habitat is threatened by river development projects. According to an article by the World Wildlife Fund, hydroelectric and irrigation schemes separate rivers and bodies of waters, which may reduce the species' range, decrease the available food supply and inhibit the botos ability to breed.

Another threat for the boto comes from the petroleum industry in the Amazon and Orinoco basins. Oil leaks and spills such as the oil spill from Ecuador's Trans-Andean pipeline have wreaked havoc on Amazonian tributaries, local communities and ecosystems downstream. These spills are complicated to clean up and often destroy entire ecosystems.

These problems are amplified by mining and deforestation for agriculture in floodplains. Heavy metal pollution (including mercury) and pesticide runoff from gold mining and agriculture pollute the Amazon and its tributaries. This poses a large threat for fish species of the Amazon as well as their predators due to biomagnification.

In Brazilian folklore, a boto is referred to as encantado, or "enchanted one." It's believed that these river-dwelling spirits are shape shifters who have superior musical ability, are seductive and are attracted to parties where they can enjoy music and dancing.

When encantados emerge from the river at night, they turn into handsome men who seduces women and then lure them down into the river, never to return.

Besides having the ability to shape shift into human form, encantados possess other magical abilities such as the power to control storms, inflicting illness or enchanting humans into becoming encantados themselves.

Check out the rest of the Amazon Animals Series to see more wildlife from the Amazon: