How Animal Agriculture Affects Our Planet 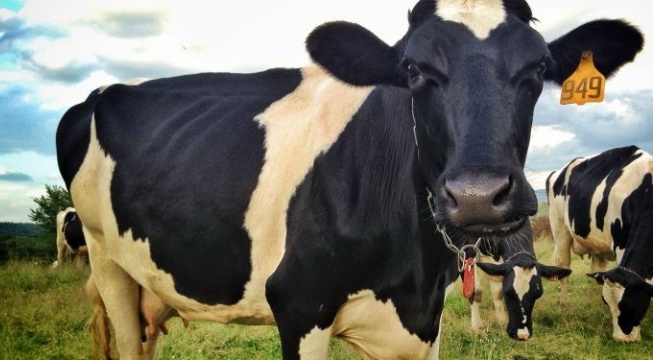 We eat animals. We eat their eggs, we drink their milk, we fish them— on an arguably gripping scale. For most of us it’s an unexamined habit that’s not carried out with any intended malice, but that doesn’t mean there are no consequences.

Seventy billion farmed animals are reared annually worldwide. More than 6 million animals are killed for food every hour. And the average American consumes 209 pounds of meat per year.

This industry is a leading cause of species extinction, ocean dead zones, water pollution, and habitat destruction—including rainforests.

Animal agriculture is more destructive to our global climate than most people realize.

Not only does rearing livestock contribute to climate change, but the reallocation of land to meet the growing demand for animal agriculture has its own repercussions.

Every second, 1-2 acres of rainforest are burned for grazing livestock or growing animal feed. An average of 137 plant, animal, and insect species in tropical rainforests around the world go extinct every day because of the destruction of these biodiverse regions. Specifically within the Amazon rainforest—which is home to at least 10 percent of the world’s known biodiversity— 91 percent of deforestation is caused by livestock.

One resource animal agriculture depends heavily on is water. The meat and dairy industry uses one-third of the Earth’s fresh water. In the United States specifically, 5 percent of water-use is domestic and 55 percent goes into animal agriculture. Part of that 55 percent includes the water given directly to animals every day. The exact amount varies from animal to animal and can fluctuate depending on the size of the animal and the environment. For example, a dairy cow will drink on average 30 gallons of water a day.

Ultimately, one hamburger requires about 660 gallons of water. To put that into perspective, that’s equal to two months of showering.

In addition to water, another resource that livestock require is land.

Currently, livestock covers 45 percent of the Earth’s total land. As a result, one-third of land is desertified. This means that the land is chronically degraded, which causes a loss of soil productivity, less nutrients and carbon in the ground, and a lack of water absorption. All of which could ultimately lead to displacement of people in areas where land isn’t suitable to use.

This type of impact requires us to reconsider how we use the limited land we have. One and a half acres of land has the ability to yield 375 pounds of meat. If that same area were repurposed, it could yield 37,000 pounds of plant-based food.

When speaking about animal agriculture, it’s easy to forget fish—but fisheries have their own environmental impacts.

For every pound of fish caught, 5 pounds of unintended marine species are caught and discarded. According to the Food and Agriculture Organization of the United Nations, almost 90% of the world's fish stocks have been exploited, overexploited, or completely depleted. Some estimates show that we could see fishless oceans by 2048.

If you chose to remove or significantly reduce animals and animal products from your diet, it can have profound environmental effects.

A person who follows a 100% plant-based diet produces the equivalent of 50% less carbon dioxide, uses 1/11th oil, 1/13th water, and 1/18th land compared to an average American meat consumer for their food.

Each day, a person who eats a plant-based diet saves 1,100 gallons of water, 45 pounds of grain, 30 square feet of forested land, 20 pounds of CO2 equivalent, and one animal’s life.

For more information about plant-based diets and their relationship with our environment, follow the links below. And always do your own research and check with your doctor before making drastic changes to your diet.