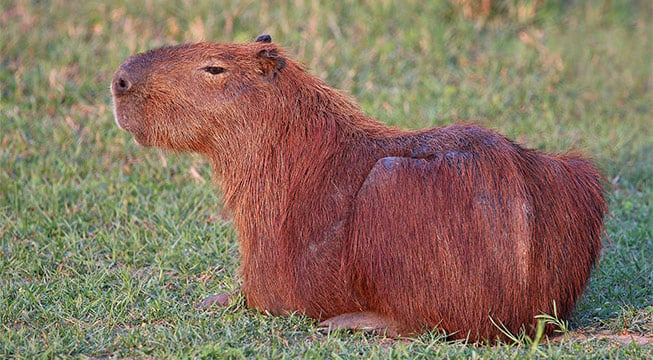 Photo by Charlesjsharp / CC BY

Once thought to be a pig of some kind, biologists now know that the capybara is actually the world's largest rodent! Standing at about two feet tall, it's hard to believe their closest genetic relative is the guinea pig.

With a face that looks like a beaver, the capybara has long, light brown hair, no tail and webbed feet. It can be found on Central and South American riverbanks, beside ponds, in marshes or wherever they can find standing water.

The capybara’s scientific name, Hydrochoerus, means water hog. This name was likely given to them because water is the source of life for the capybara.

They feed on water plants and grasses, mate in the water and play in the water. Capybaras even use the water to escape from predators, hiding underwater for up to five minutes at a time.

Using their webbed feet to swim, capybaras spend hot days immersed in shallow water or wallowing in mud before venturing out to graze in the evening.

Capybaras are crepuscular, meaning they are most active during dawn and dusk. They most commonly eat during these times, but will wait until the safe cover of night if they feel threatened.

During the wet season, capybaras graze on water plants and grasses using their long, sharp teeth. An adult capybara can eat 6 to 8 pounds (2.7 to 3.6 kilograms) of grass per day!

When water plants and grasses are not as readily available during the dry season, capybaras will eat reeds, grains, melons and squashes.

Even though rodents aren’t closely related to goats and cows, capybaras ruminate their food. This means that after swallowing their food, they regurgitate it to continue chewing it. Like a camel, capybaras can chew their food from side to side, rather than up and down like humans. Both of these adaptations aid in their digestion of tough, fibrous plants.

Capybaras usually live in groups of about 30 animals, but during the dry season groups of more than 100 can be found.

Usually, a group stays in its home territory of about 29 hectares, although ranges of different groups can sometimes overlap. This makes it easy for juvenile capybaras to find a new group after they have reached maturity and are pushed out of their original family herd.

As an effort to ensure that most newborn capybaras survive, all of the females in the group help to care for and nurse each other’s young. This way, there are many sets of eyes watching over the youngsters, who can easily fall victim to caimans, ocelots, eagles, and anacondas.

The primary predator of an adult capybara is the jaguar, but  humans hunt them as well for their meat and fur.

Although the capybara is not currently threatened, the habitat it thrives in is.

Since the range of a capybara group is about 50 acres, having unfragmented land to roam on is essential. Oil exploration and exploitation have caused roads to be built in the Amazon rainforest that break up the range of capybara habitat. To cut down the dust on these roads, oil is spread over them and ends up polluting the rivers and waters that capybara thrive in.

In indigenous cultures in the Amazon, water contamination by oil has led to increased risks of cancer, abortion, dermatitis, headaches and nausea. Their drinking, bathing, and fishing water contain toxins significantly above the safety limits set by the US Environmental Protection Agency.