What is Climate Justice? 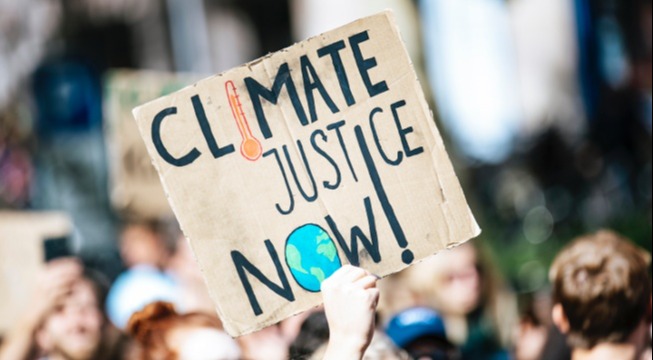 “All human beings are born free and equal in dignity and rights. Yet, when it comes to the effects of climate change, there has been nothing but chronic injustice and the corrosion of human rights.”

The impacts of climate change across the world are in no way equal.

While the physical effects of climate change on the environment are tangible everywhere around the world, the capacity for different populations to alleviate these impacts is not universal. Considering certain groups of people lack the resources to address and mitigate the effects of the climate crisis, climate change is both an environmental and a social justice issue.

Marginalized communities disproportionately experience the adverse effects of climate change because of their unequal access to resources and to decision-making processes. As a result, these communities—which are often BIPOC and/or poor—are limited in their ability to offset the impacts of the climate crisis, which exacerbates and compounds existing inequalities.

Altering the environment without regard to its impact on the people who live there is an issue faced by many predominantly BIPOC and poor communities. People of color make up the majority of those living in neighborhoods within 1.8 miles (3 kilometers) of the hazardous waste facilities in the U.S. These areas, known as sacrifice zones, are areas where corporations from polluting industries—such as mining and drilling—sacrifice Black, Brown, multiracial, Indigenous, or poor White communities in order to advance their own profits. Not to mention, hazardous industries—such as industrial agriculture—often exploit the labor of marginalized peoples who are subject to non-livable wages and hazardous working conditions.

Even when people resist and challenge projects that harm the environment and their communities, corporate power often overrides the will of the people given the ways in which the U.S. political system tends to favor and protect corporate interests.

What is Climate Justice?

Climate justice is where justice for our planet and justice for all people intersect. According to Movement Generation, climate justice is the balance between healthy communities and thriving ecosystems based on reciprocal relationships and participatory self-governance. Climate justice shifts the focus of the climate crisis from one that is solely based on ecological matters (such as greenhouse gas emissions and the destruction of forests) to one that frames the climate crisis as the ethical and political issue it truly is.

The History of Climate Justice Advocacy

Throughout the years, frontline communities have been advocating for climate justice. Some of the first publicized instances of climate justice advocacy include:

Although these protests were instrumental to the climate justice movement, it wasn’t until 1982 that an environmental effort led by people of color gained national attention.

When the state government in North Carolina decided to dump PCB-ridden soil in an African American community, the backlash spread across the state and country. For months, protests and rallies took place that eventually caught the attention of researchers who started to investigate the environmental burdens faced by BIPOC and/or poor communities. In 1987, the findings of this study were published in the Toxic Wastes and Race report.

Climate Justice at the United Nations

In 2000, the first Climate Justice Summit took place within the United Nations Framework on Climate Change (UNFCCC). While the mainstream environmental movement and many of the official discussions around climate change at the U.N focused on the physical impact of climate change and market-based solutions, this Summit centered on justice. This marked the first time a diverse group of grassroots activists alongside leaders from across the world gathered to highlight the importance of seeing the intersection between the climate crisis and human rights.

Around 500 people from across the world attended this event, and many of them spoke about how corporations from the fossil fuel industry are responsible for the destruction of our planet and for violating basic human rights. The lack of urgency from governments to tackle the disproportionate effect of climate change compelled local communities and activists to tackle climate issues on their own. Throughout the summit, activists and activist groups, such as the Concerned Citizens of Norco and representatives of Indigenous communities, shared their stories on protecting their human, cultural, and environmental rights.

The First National People of Color Environmental Leadership Summit, which convened in Washington D.C. 1991, drafted and adopted the following Principles of Environmental Justice:

These Environmental Justice principles are key to creating a world that works for all, and have guided the work of grassroots movements for climate justice.

The Importance of Climate Justice

By addressing the root causes of the climate crisis, we are transforming the systems that simultaneously degrade the environment, put communities at risk, and sever our inherent interconnectedness to each other and to the natural world.

Justice for the planet includes justice for all people. Climate justice ensures that we are creating effective climate solutions rooted in respect, equity, and justice. If solutions to the climate crisis aren’t rooted in these principles, the result will reproduce the injustices to both people and our planet.