The Spiritual Side of Environmentalism

When we think of spirituality, it is often in terms of a sense of connection to something bigger than ourselves or a search for meaning in life. Some people may associate spirituality with going to church or temple, praying, meditating, fasting, attending spiritual retreats, making a spiritual pilgrimage, or spending time in nature. Most would agree that essentially all widely-accepted forms of spirituality are centered around love, compassion and caring for others, developing a connection to the source of life, and living in an ethical and moral manner.

If we accept that spirituality compels us toward love, compassion, and ethical ways of living, then spirituality necessarily leads us toward a moral imperative to take better care of the Earth than we are now doing as a global society.

All living beings are inextricably connected to the Earth. We are made of her elements and minerals. We emerge from her at birth; we eat the food and drink the water that she provides; and at the end of life, we become a part of her once again.

As humans, we also intrinsically rely on far deeper aspects of our relationship with nature, such as our need for creative inspiration, peace and tranquility, and a deep interconnectedness to the energy and vibration of all life on the planet.

The Earth is a complex and intricate web. When we negatively impact our planet, we harm all beings who depend on her for life. Likewise, when we hurt people, plants, or animals, we damage the Earth as well.

If we look within, we are sure to find a longing in our hearts to protect the Earth herself from suffering and sadness, to create a world in which we can each pursue our dreams and aspirations without harming the one planet that supports the type of life that we love and treasure.

What Are We Doing to Ourselves?

When we reflect on the need for meetings such as the COP 21 conference or initiatives such as the UN Sustainable Development Goals, we automatically enter into a moral and spiritual discussion, due to the gravity of our current situation. Even the UN officials and many world leaders seem to be speaking in spiritual terms at times, as they express their concern over the environmental crisis.

This is because global warming is not simply causing unusual weather patterns and hotter summers. The impacts from climate change are much more severe and life-threatening, and much more immediate, than we can tell by looking out of our own windows. Global warming is cutting off large populations of people from their traditional modes of subsistence, rendering them unable to feed themselves or their children. It is causing the unchecked spread of diseases such as malaria. It is decimating species at the fastest rates the Earth has experienced since before humans emerged on the planet. It is causing untold suffering for people and animals in polar regions, rainforests, and other delicate ecosystems, where the rapid environmental changes are decimating their way of life.

Our modern society based on endless consumption, which is the primary cause of global warming, has other harmful side effects which also bring ethics into the picture:

Our world leaders, particularly those participating in the ongoing United Nations climate discussions leading up to COP 21, are faced with a question that seems nearly impossible to answer: Now that we are so deeply entrenched in this way of living, what can we do to turn things around?

Political Initiatives With a Spiritual Basis

World leaders are spurring political action on many fronts that is increasingly aligned with spiritual and ethical goals as a path to environmental sustainability:

To protect indigenous groups that have been harmed by oil drilling and climate change, indigenous pavilions and Rights of Nature tribunals will occur at the COP 21 meetings in Paris in December 2015.

The Earth and its vital ecosystems are beginning to receive the respect and legal protection that was previously reserved for humans. For example, in New Zealand earlier this year, a river was legally granted the rights of personhood.

Taking Individual Action Based on Spirituality

An over-dependence on logic, technology, and economics got us into this mess. So it makes heart sense—soul sense—that spirituality, intuition, and reconnecting with nature may be the only way out.

Let us consider a new definition of spirituality. Spirituality as our system of deeply-held beliefs that allow us to go beyond politics, beyond economics, beyond societal norms in order to make decisions for the common good of all beings. Beliefs that connect us to the very heart of who we are and what we know is most important.

Although it may be difficult, we can rise above materialism and societal norms when we know it is the right thing to do.

When we recognize that we are harming each other, that our everyday actions are depleting the resources of Mother Earth who gave us life, that by accepting the modern dream of materialism and consumption we are reducing the possibilities for future generations to thrive and pursue their own dreams …

Then, at that very moment, our spirituality opens up a new space of clarity within us, where we fully internalize the conviction that each one of us has the universal responsibility to make the world a better place.

Then, suddenly, we know what it is that we need to do in the world. How our small, precious set of skills and our unique viewpoint can lend a vital force and power to the vast movement that is occurring in the world at this time.

Every one of us has talents that can make a powerful and positive difference in the world. It may be your beautiful singing voice. It may be your talent for public speaking or your ability to bring together diverse groups of people for a shared goal. Or it may be your knowledge of farming, finance, software development, or manufacturing that can lead to a breakthrough in sustainability. We all have a part to play; it is just a matter of finding your inspiration, and that can only come from the deepest reaches of your heart and soul.

To go deeper, reflect or meditate on one (or both) of the following quotes, and see what kind of new possibilities and never-before-imagined ideas open up for you.

“Let us dream our grand, impossible dreams as a community of people and our intimate, personal dreams as individuals. Let us unlock our potential to thrive in a just, peaceful, and fulfilling reality. By harnessing the power, mystery, and magic of the timeless legacy of shamans [by connecting to our inner light through spirituality] … we are impacting and taking care of each other and the world.” – John Perkins

"Another way of being is possible,and it is right in front of us, closer than close. That much is transparently certain. Yet it slips away so easily that we hardly believe it could be the foundation of life; so we relegate it to an afterlife and call it Heaven, or we relegate it to the future and call it Utopia. Either way, we set it apart from this world and this life, and thereby deny its practicality and its reality in the here-and-now. Yet the knowledge that life is more than Just This cannot be suppressed, not forever."
– Charles Eisenstein

Download our The Eagle and the Condor e-guide, and read more about how people can join together in compassion and understanding, and work together to renew the sacred balance of the Earth.

Soaring into the Future on the Wings of an Ancient Prophecy

In this special e-guide, John Perkins, best-selling author and co-founder of Pachamama Alliance, discusses how an ancient prophecy—more than 2000 years old—explains the past in the context of the future, giving meaning to our present. This is a story of division and conflict, but also of union and peace. 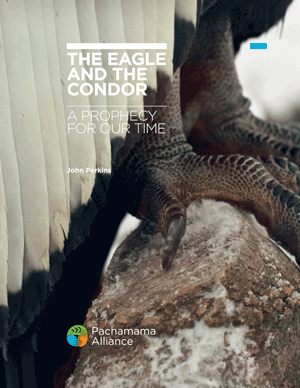